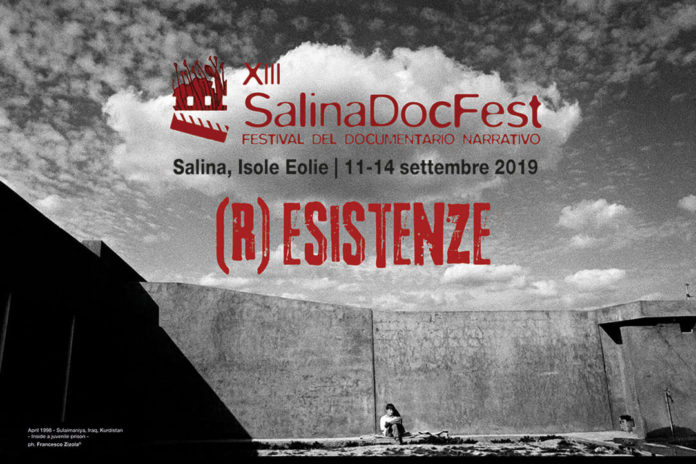 One photo, one image.

The black courtyard of a prison, under the white sky above. A guy in center of the frame, a small figure in the big concrete atrium. Sitting on the ground, shoulders against the wall, legs crossed. Alone.

We are in the juvenile prison of Sulaimaniya, the city of Iraqi Kurdistan, as we read in the caption. The date, 1998, brings us back to the years of the civil war in Kurdistan, after the tragic decade of Saddam Hussein.
Inside the prison, in a whole that accentuates his solitude, but also his strength, the young prisoner waits for the last clouds to go away.

This is the photo that Francesco Zizola, World Press Photo of the Year, has donated to the SDF to synthesize the image symbol of (R)existences.

That young man in the middle of the frame took me back to Walter Benjamin’s Angelus Novus, inspired by the famous painting by Paul Klee. He has his gaze tilted down, turned to the past, where he sees only piles of rubble, death and ruins. But behind him there is a storm of wind that opens its wings and drags him irresistibly towards the future.
To the young Angels of History I dedicate this edition of the Festival
Yesterday the young Kurdish man who (r)exists; today the young Europeans are protesting for the future of the planet and want to take over the world. Free from ideologies, between the wall that sepa-rates them from the adult world and the domed sky that propels them towards the future.

Salina is an existing model of acceptance and integration, a true antidote to the terrible wave of social xenophobia that is passing through Europe. R-existing are the capers, symbol of the green island of the archipelago, to whose flower our logo is inspired. Their roots are a network of very thick capil-laries able to retain water. Capers, in fact, are (r)existing plants.
R-Existing are the documentary makers and stories that they will bring to the competition. Stories of private and collective resistance, of alliances that want to oppose the dispersion of memory. They are the new villains of our country – to resume the title of the beautiful documentary out of competition by Donpasta –, who from the center move to the suburbs, to the South, to return to work the land, in old and new forms of life and cohabitation.
R-existing are the adolescents of the Traiano district of Naples, told by Agostino Ferrente, in the award-winning documentary Selfie, who learn to look at themselves from the outside, with the look of the cinema; learn to cross the hedge with the power of imagination.
R-existing are not the suburban boys who cannot study and are destined to the underworld, as in the film Piranhas, by Claudio Giovannesi, awarded in Berlin for the best script together with Roberto Saviano (to whose novel it is inspired) and to Maurizio Braucci.

Giovannesi, who returns this year to Salina as member of the jury, together with Zizola and the great French documentary filmmaker Nicolas Philibert, will meet the audience at the end of the screening with Enrico Magrelli, to reflect on the differences between novel and film. «I didn’t want to remake Gomorra. I wanted to see the protagonists from within, side by side with an empathetic, not detached look». So the director in an interview published in our site; and adds: «While writing the script, I had in mind the final of Germany Year Zero. Edmund tries to play football with the other children, but the game no longer succeeds him. He has lost his innocence».
R-Existing is the School, the great absent of the suburbs of our country. If Ferrente chooses an abandoned school as scenography where to set the escapes of the two protagonists; Giovannesi seems to tell us that when the institutions no longer invest in the school, the boys get lost, the delinquency spreads. «The damage is equivalent to the explosion of an atomic bomb».

R-existing are cinema and photography, which, thanks to the two great guests of this edition, Marco Bellocchio and Letizia Battaglia, that leave the memory of what we were to the young people. From the massacres of terrorism to those of the Mafia, from the crime of Aldo Moro to the death of Falcone and Borsellino, Bellocchio and Battaglia told, with the eye of imagination and the contempt of the invention, the years when our generation burned our youth.

The first brings to Salina a decisive film of this last year, The Traitor, great success in Cannes and at cinemas, where he sold out. A demonstration that great cinema can deal with strong themes anchored to reality, with the visionary fantasy of language, scanning the dark limits of the human being.

We speak of the sinister figure of Tommaso Buscetta, played by Pierfrancesco Favino, but also of the red primrose of Corleone, Luciano Liggio, one of the greatest defendants of the maxiprocesso, in the film played by Vincenzo Pirrotta, also a guest of the Festival.

Marco Bellocchio, author of a pure cinema where prose becomes poetry, this year is awarded with the new Premio Ave – Energia della Poesia/Poesia dell’Energia, born from the synergy with an enlight-ened entrepreneur, and writer, as Alessandro Belli.
The shadows of the past return and emerge from the repressed, individual and collective, combining the great literature of Dostoevsky and Kafka with the highest tradition of cinema in reality. As happens in the beautiful documentary Shooting The Mafia, by Kim Longinotto, on the great figure of Letizia Battaglia.

From the beginning of his career, when she collaborated with the Palermo newspaper “L’Ora”, until the attack to Falcone, where «I didn’t had the strength to go», Palermo is the humus from which Letizia drew her vital lymph, Her strength, her desire for freedom. But the real protagonist is her: a woman who was very loved and much loved; who photographed the smell of Palermo’s blood, and who now knows, perhaps, that she will never be able to get rid of it again. Because the film, after all, is about love, fear, death. Of the transience of life, of the victims of the Mafia, vanished in the furious black and white shots, like love experiences, which sooner or later end.

What remains? – Letizia asks to herself, unusually docile and fragile, in the end. What is left about Falcone, of Borsellino, of broken lives, of finite loves, of our resistance, of our dreams? The images an-swer for her: we remain, and our memory.
For this reason we have adhered to the appeal in defense of teaching of History – La Storia non si cancella (History can’t be erased) – launched by Andrea Giardina, Liliana Segre and Andrea Camilleri, to whom our thoughts and our deep embrace go. And for this reason, in collaboration with CIDI Palermo, this year we inaugurate a new section Cinema and History, dedicated to teachers, the last free intellectuals of our country.

At the preview of Palermo in June, dedicated to Mimmo Lucano and to the teacher suspended by school administration , Rosa Maria Dell’Aria, Romano Luperini, who was also my teacher, opened his speech with a quote from the great Polish sociologist Bauman, taken from his Elogio della Letteratura: «How can we become ourselves without a legacy, without a teacher, without its voice, without a deep message?».

Educate means raising up, growing, transmitting a legacy that comes from the past and looks to the future, without which the young student will never be able to become himself. «A student – he concluded – is mature not when he acquires notions, but when he learns to be moved by what is beautiful and what is great». The teacher is much more than a professor: he transmits an emotional inheritance, as well as cognitive; he teaches to live civilly; not to bow to the God of money, but to the greatness of the human soul.
A phrase by Pasolini comes to my mind: it is not the horror that gives anguish, but its obviousness. When the horror becomes obvious, human civilization is lost. Too often this year the horror has become obvious; too often we have turned our heads away. This is why with the new section on Cinema and History we turn directly to the school, for a collective reflection on the preservation of historical memory and on the teaching of the culture of legality through cinema.
R-existence of memory, as reminded us by the international guest of this edition Abraham Yehoshua. From A Late Divorce to The Human Resources Manager to The Tunnel, which Valentina Carnelutti will interpret for the public, Yehoshua has always worked on the recovery of memory as the only vehicle to build the bridge of peace between the Palestinian people and the Israeli people.

But in our memory there is also the remembrance of when we were emigrants. Especially in Salina, where emigration to Australia and the Americas during the 20th century overthrew the island in a few years.
After the lightning experience of last year, where Mario Incudine enchanted the audience with the tales of Polifemo and Ulysses, ungrateful host, this year OPERA PAESE – REFUGEES, a collective tale conceived and directed by Ugo Bentivegna, in national preview in Salina, with the extraordinary partic-ipation of the inhabitants of the island.
In an imaginary procession of emigrants, who in 1915 set off from Santa Marina to reach the Americas, accompanied by Mario Incudine at the guitar, in the role of Salvatore, Bruno Trimboli, Rita Costa, the little Elia, Momo and other extras of the island, they will put on the clothes of their grandparents and their grandmothers, and they will evoke the pain of the departure, the abandonment of their own land, the fear of the stormy sea.

The Festival will end on that pier, a few miles away from another pier, on another island, the Favolaro pier in Lampedusa, where Lidia Tilotta, for years, as Rai 3 special correspondent “Mediterraneo”, told stories of immigrants who didn’t make it. On that pier Lidia met a man, among the green sacks deposited on the beach, bent over looking for a sign, something that would make a body recognizable. That man was Pietro Bartolo, the doctor of Fuocoammare.

From that meeting a four-handed book was born, Lacrime di sale, which today the two authors carry around all over Italy and Europe in schools and universities.
Not to forget and not to let forget, to shake consciences.
Because the horror would not be obvious.
Because what is great and what is beautiful makes us move again

Here is the lineup for the XIII edition of SalinaDocFest, in the name of resistance 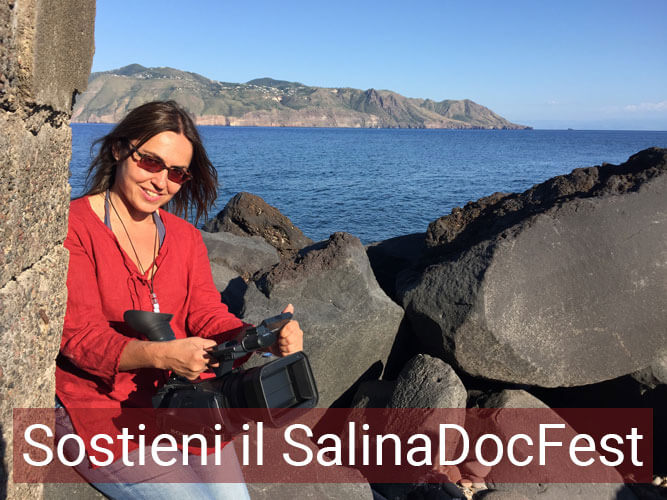